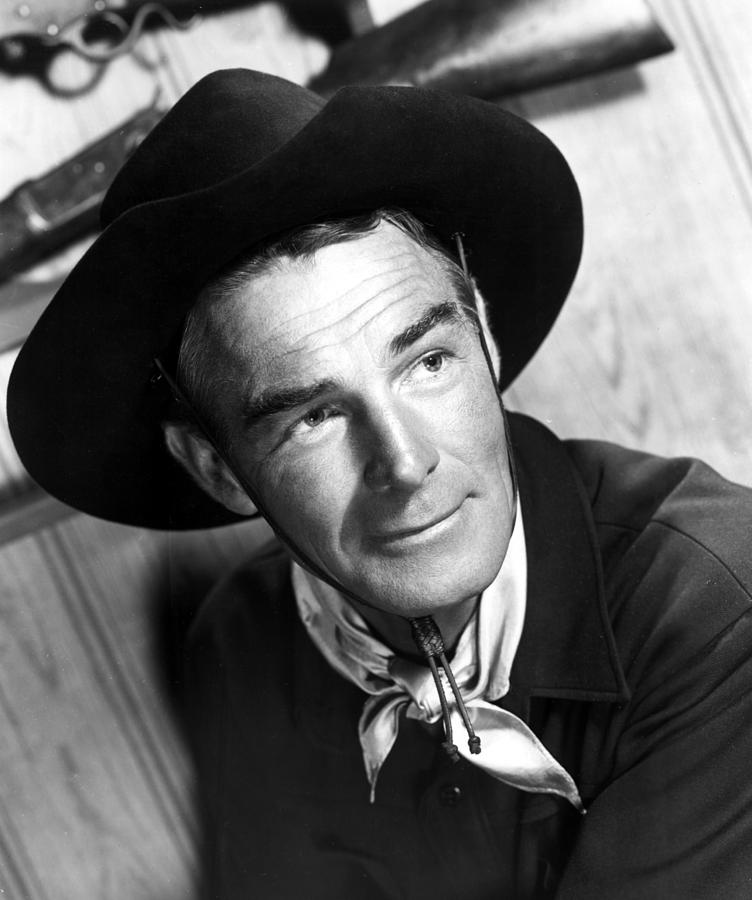 Handsome, smooth, charming – and of course talented. Perhaps that’s why many of us remember Randolph Scott as one of Hollywood’s most popular Western movie stars. The career of the World War I veteran-turned-film-actor spanned a remarkable five decades. Scott appeared in a variety of film genres, from dramas and comedies to musicals and war films. But it was his flawless portrayal as the charismatic hero in nostalgic Westerns that propelled his box office career. Born in 1898, Scott grew up in North Carolina and then graduated from UNC with a degree in textile engineering and manufacturing. Soon after, he discovered acting and headed out west to California, where he eventually landed small parts in the comedy Sharp Shooters (1928), and in The Virginian (1929), a Gary Cooper film. Scott scored his first leading role in Women Men Marry (1931), a Poverty Row film that remains lost to this day. Later, Scott took a supporting role in A Successful Calamity (1932). Eventually signed to Paramount Pictures with a seven-year contract, Scott became a fledgling star, appearing in four films from 1935-1936, including Roberta (1935) – starring his best friend Fred Astaire – and Go West, Young Man (1936). By the 1940s, Scott transformed into a bona fide Western movie star, riding tall in the saddle in films such as Captain Kidd (1945) and Abilene Town (1946). By the 1950s, the Carolina native’s films were consistently top ten box-office draws, such as Badman’s Territory, Trail Street, Rage at Dawn, The Cariboo Trail, and his last black-and-white movie, Shootout at Medicine Bend, co-starring James Garner and Angie Dickinson. 1962 marked Scott’s final big screen appearance with the successful release of Ride the High Country, now regarded as a classic by many film pundits. Following the film, Scott retired from movie making, but he remained off-screen friends with renowned performer Fred Astaire and acting legend Cary Grant.